FACTORS TO CONSIDER BEFORE HIRING A SEO PROFESSIONAL

You've heard about search engine optimization, but you're not entirely sure if it's for you. Luckily for you, we took the time to break down the factors to consider before hiring an SEO professional. Download our white paper for all the information you'll need. In addition to the white paper, you'll receive emails from us periodically on all things digital marketing.

Do not show again

In the ever revolving door that is social media, it seems there are updates to social channels on a daily basis. Following is a list of social channel features that we have highlighted for you including Facebook, Twitter, YouTube, and Yelp.

Facebook has launched a “Feed Quality Panel” that has surveyed over a thousand people to elaborate on their social experience and give feedback to enhance user experience. Facebook has released new metrics for video, which allows the creator to see how long a viewer actually viewed the video and how many people watched the 10 second view option. 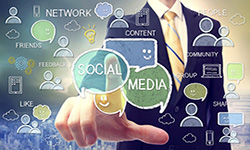 Twitter’s timeline change is designed to allow users to view top and relevant tweets while the user was away from their timeline for an extended period of time. Twitter also made adding GIFs substantially easier, which is great for people who don’t know how to create a GIF.

Yelp and Sprinklr have joined forces which allows for full-text reviews, analytics and insights to businesses who are on Yelp.

YouTube added a blur feature back in 2012 so users can blur out anyone’s face who didn’t approve of being in the video. Now YouTube has expanded upon the concept and you can now blur out logos and objects.

We offer a variety of social media services, being experts in the digital world we are here for all of your social needs. Contact us today!

This website uses cookies to improve your experience while you navigate through the website. Out of these cookies, the cookies that are categorized as necessary are stored on your browser as they are essential for the working of basic functionalities of the website. We also use third-party cookies that help us analyze and understand how you use this website. These cookies will be stored in your browser only with your consent. You also have the option to opt-out of these cookies. But opting out of some of these cookies may have an effect on your browsing experience.
Necessary Always Enabled
Necessary cookies are absolutely essential for the website to function properly. This category only includes cookies that ensures basic functionalities and security features of the website. These cookies do not store any personal information.
Non-necessary
Any cookies that may not be particularly necessary for the website to function and is used specifically to collect user personal data via analytics, ads, other embedded contents are termed as non-necessary cookies. It is mandatory to procure user consent prior to running these cookies on your website.
SAVE & ACCEPT
Translate »